As reported in Forbes in April of last year, 73% of companies are planning to move to a fully software-defined data center within two years. The transition is well on its way in many industries. For example, FedTech recently surveyed federal agencies and found that 64% had deployed software-defined solutions, while 85% reported progress toward that end.

Progress is the key word. The evolution from a traditional data center architecture to one that is software-defined can take months if not years. A study conducted by McAfee found that on average respondents said they had 17 months remaining until they achieved full transformation to a software-defined data center. That was down from 27 months a year ago, so progress is apparently being made.

But even then, we need to factor in how these organizations are defining a software-defined data center. For example, are they just looking at virtualizing their servers? Or are they incorporating software-defined networking and storage into their solution as well?

For more insights on the progress toward the fully software-defined data center and what it means to the future of the data center, we spoke with David Hines, vice president, architecture and engineering at TierPoint.

Hines: That’s a good question. What makes the software-defined data center different from a traditional data center is the moving away from the physical components that make up the data center. If you think about the goal of a data center, it’s to support the applications the business needs to achieve its goals. To that end, IT traditionally needed to acquire a number of physical things. They buy servers. They buy storage. They buy network switches, and routers and firewalls. There’s a lot of physicality involved with sizing up your needs, buying that equipment, finding a physical location to house it, and then maintaining everything. It all takes time; time that none of us has in abundance 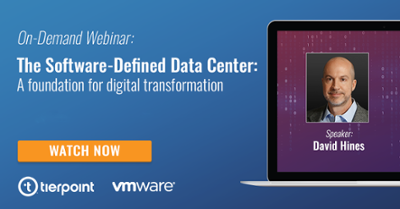 Another one of the big challenges with the physicality of provisioning a data center is that it’s static. You get what you bought, and for the most part, you’re stuck with it. If you didn’t assess your needs very well, you might need to add to what you have, starting the procurement process all over again. Or worse, let’s say you aren’t happy with the platforms you chose, you may need to offload what you have before you can start again, which takes even longer.

Conversely, the software-defined data center abstracts all of the physicality of these components. You procure your hardware, but then you have almost infinite flexibility to define virtual machines on top of that. Keep in mind, this aspect of the software-defined data center isn’t new. It started back in the mainframe days, but it resurfaced and really came into its own in the mid-2000s, with organizations like VMware and their hypervisor solution.

So the virtualization of computing resources was a fantastic step in the evolution, but it left a lot to be defined. Storage systems still tended to be what we call “Big Iron,” which were very complex and very expensive. Networks still required physical cables to be run from one place to another with physical firewalls and physical switches.

With the current evolution of the software-defined data centers, that’s changing. Lots of vendors are offering hyperconverged devices that combine network, storage and compute resources all on a single device. We also have products like vSAN, ScaleIO and Nutanix that add software-defined storage capabilities on top of that infrastructure. If I need more storage, I just throw another commodity server with a bunch of disks into the mix, and I don’t have to worry about lifting and shifting from one legacy storage system to another.

The network is also being abstracted from all the physical cabling and the physical components like a firewall and a router that help your data get from point A to point B. VMware did a great job with this with NSX, and they have completely virtualized logical firewalls, logical routers and logical switches.

That’s kind of a long answer, but I think a look at the evolution of the data center from what we knew twenty years ago to where it’s going helps demonstrate why the move to the software-defined data center, though not a new concept, still has the ability to transform the way we approach data center resources and staffing.

Interviewer: The move from physical components to virtual ones sounds pretty significant. Talk to us about what that means to the business.

Hines: To the business at large, the impact is huge. Before software-defined data centers, large, globally dispersed organizations had to have an army of engineers who could go out and reconfigure their data centers manually. Not only is there the cost of hiring and retaining these engineers, but you also have all the travel expenses involved. You can’t really avoid those expenses by staffing each site with data center engineers, because this isn’t usually a full-time role on site.

So there’s the cost benefit, but there’s also a huge agility component. Being able to make a change to support the business in a matter of minutes instead of months means the organization can respond much faster to opportunities.

The day-to-day responsibilities of the data center staff will look very different as well, the biggest difference being that in a fully software-defined data center everything is programmable. Historically, not only did you have all of these physical devices that you spent time and energy buying, racking and stacking, but you also spent a lot of time at the keyboard configuring, managing and maintaining updates. Again, very expensive in both actual dollars and in time.

Once everything is programmable, engineers will spend less time doing the physical, time-consuming work of configuring a data center and more time at a keyboard doing what we call “infrastructure as code,” using Python, Perl, PowerShell or some other high-level language. Being able to define these components programmatically means they can perform massive rollouts of changes across thousands of systems from their keyboard instead of manually reconfiguring each of these systems individually.

I think we’ll see the quality of life for IT professionals improve, too. Frequent flyer miles may drop, but they’ll miss fewer soccer games and recitals.

Hines: The approach could be used by either. But here’s the issue for the enterprise – expertise. Not everyone is a programmer. Not everyone understands the software-defined component. Not everyone has the in-house expertise needed to purchase, configure, and ultimately, manage hyperconverged devices or software-defined components. It’s also important to remember that there are other key IT deliverables that go along with this as well, such as security, compliance, backups, disaster recovery planning or any of the number of other “must haves” in a modern data center strategy.

Interviewer: Can you give us a more concrete example of the agility improvements a company with a software-defined data center might see? Maybe use something from your own experience.

Hines: Sure. Let’s take an example of a customer that says, “I have a firewall, but I want to add a load balancer.” If it’s all physical components, I either have to find that load balancer in my inventory or procure it. Then I have to ship it to the location, physically rack and power it, cable it and reconfigure the networking to use that load balancer in-line. We’re probably talking four to six weeks. It could be less if you have the load balancer in stock, but if you need to purchase it from a vendor, it could be even longer.

Now, imagine the customer is housing their infrastructure in one of our software-defined data centers and they say, “I want to add a load balancer.” I have an image of a load balancer in my catalog in my cloud. I simply instantiate a copy of that, which takes about 10 minutes. Then I’m going to do what we call “service insertion” in my programmable software-defined network. I programmatically change the flow of the network to use that load balancer as a gateway. That’s another five minutes and it’s done.

That software-defined data center is supporting the business’s need to change not in weeks or months or even days, but in minutes. Businesses have been talking about becoming more agile for decades. This is agility on an unprecedented level.

Interviewer: What sort of closing thoughts do you have for the business looking to migrate from a traditional data center to a software-defined data center?

Hines: I think the benefits are pretty obvious for anyone who’s looking at what a software-defined data center can do for them, so I don’t want to belabor those points. The bigger challenge is determining how they are going to get there. We’ve talked a bit about the skills that are needed, and we can’t overemphasize the importance of that. If you’ve been managing a traditional on-premises data center, these probably aren’t skills that you already have in-house.

You’re either going to have to retool your existing IT department, which I can tell you from personal experience isn’t quick or easy. It’s a steep learning curve, and the kinds of skill sets we’re talking about don’t come cheap. Or you’re going to need to work with an outside provider like TierPoint to help you get there faster.

To learn more about TierPoint and how you can leverage our software-defined data centers to improve the responsiveness, flexibility and cost-structure of your IT infrastructure, reach out to us today.

Are You Using Private Cloud to Accelerate Your Hybrid Strategy for Digital Transformation?