When is this happening? The end of Extended Support for Windows Server 2008 and R2 stops on January 14, 2020 and on July 19, 2019 for the 2008 versions of SQL Server. Without Extended Support, IT departments will no longer receive bug fixes, security updates or critical patches.

Fortunately, both Microsoft and TierPoint are offering help for IT departments that need to upgrade. Microsoft has information about migration options on its website, noted Dave McKenney, director of product management for TierPoint. In addition, TierPoint can help with consulting, migration support and managed Azure services.

McKenney–along with Allen Rogerson, Windows engineer for TierPoint, and Jacob Wilkins, database administrator—hosted an informational webinar, The End is Near! Preparing for SQL Server 2008 and Windows Server 2008 End of Life to help IT administrators understand their options. Following is some of the highlights from that session.

There are many good reasons for migrating up to Windows Server 2016, including several useful and innovative new features. Three important ones are:

IT departments have three options for migrating off Windows Server 2008. Those are:

Always-on Availability Groups, introduced in 2012, is perhaps the most popular reason for migrating. Availability groups are a set of databases designed to fail over together. The feature offers database-level protection and high availability and disaster recovery, as well as offloading of read-only workloads from your primary replica to a secondary, conserving resources for mission critical workloads.

Always-on encryption keeps data safe as it moves to and from the Database Engine. Even the DBAs working with the data can’t see it if they’re not authorized to.

Row-level security provides greater granularity by allowing data owners to restrict visibility of entire rows based on the user and query. For example, an unauthorized user in marketing querying an employee database for possible charity volunteers won’t be shown a row of employee social security numbers.

Data masking obfuscates data by replacing it with equivalent but fake data for non-authorized users. Data masking allows developers, application testers and others to use the data without seeing the actual information.

IT departments have three options for moving up from SQL Server 2008 and R2:

Regardless of which path you choose; expert assistance can make the move go more smoothly. As a managed Azure services and colocation provider,  TierPoint has the infrastructure and expertise to help you plan and execute a migration or upgrade quickly and with minimal downtime. 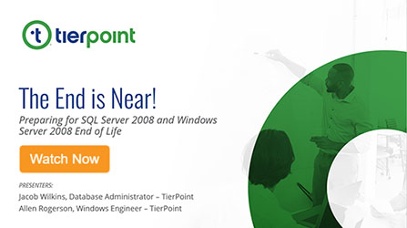 You can also find more information at Microsoft’s 2008 End of Support Resource Center.

IT Professional Services Managed IT Services